While in-person worship is suspended, we are worshipping together in spirit!

The readings and prayers are attached to this post, as well as the sermon for the day.  As an alternative to our normal introductions to the readings, you might check out the short clips from the Bible Project – they have often been a favorite of our confirmation students.

After the sermon, I’d invite you to follow the link to Page CXVI’s version of “Come Thou Fount” as a way to reflect on the living water Christ offers us anew, even in the midst of social distancing.
The peace of Christ be with you always.
+ Pastor Inger

First Reading:  Exodus 17:1-7
If you want to connect with scripture in a new way and remember the context for this story, watch the Bible Project’s overview of the first part of Exodus.  Our reading for today is summarized in the last 35 seconds.
https://www.youtube.com/watch?v=jH_aojNJM3E
Psalm 95
Romans 5:1-11
The Bible Project puts this passage in the context of the whole book of Romans here.  Our reading is summarized in the first two minutes.  https://www.youtube.com/watch?v=0SVTl4Xa5fY

3 he left Judea and started back to Galilee. 4 But he had to go through Samaria. 5 So he came to a Samaritan city called Sychar, near the plot of ground that Jacob had given to his son Joseph. 6 Jacob’s well was there, and Jesus, tired out by his journey, was sitting by the well. It was about noon.

7 A Samaritan woman came to draw water, and Jesus said to her, “Give me a drink.” 8 (His disciples had gone to the city to buy food.) 9 The Samaritan woman said to him, “How is it that you, a Jew, ask a drink of me, a woman of Samaria?” (Jews do not share things in common with Samaritans.)[a]10 Jesus answered her, “If you knew the gift of God, and who it is that is saying to you, ‘Give me a drink,’ you would have asked him, and he would have given you living water.” 11 The woman said to him, “Sir, you have no bucket, and the well is deep. Where do you get that living water? 12 Are you greater than our ancestor Jacob, who gave us the well, and with his sons and his flocks drank from it?” 13 Jesus said to her, “Everyone who drinks of this water will be thirsty again, 14 but those who drink of the water that I will give them will never be thirsty. The water that I will give will become in them a spring of water gushing up to eternal life.” 15 The woman said to him, “Sir, give me this water, so that I may never be thirsty or have to keep coming here to draw water.”

16 Jesus said to her, “Go, call your husband, and come back.” 17 The woman answered him, “I have no husband.” Jesus said to her, “You are right in saying, ‘I have no husband’; 18 for you have had five husbands, and the one you have now is not your husband. What you have said is true!” 19 The woman said to him, “Sir, I see that you are a prophet. 20 Our ancestors worshiped on this mountain, but you[b]say that the place where people must worship is in Jerusalem.” 21 Jesus said to her, “Woman, believe me, the hour is coming when you will worship the Father neither on this mountain nor in Jerusalem. 22 You worship what you do not know; we worship what we know, for salvation is from the Jews. 23 But the hour is coming, and is now here, when the true worshipers will worship the Father in spirit and truth, for the Father seeks such as these to worship him. 24 God is spirit, and those who worship him must worship in spirit and truth.” 25 The woman said to him, “I know that Messiah is coming” (who is called Christ). “When he comes, he will proclaim all things to us.” 26 Jesus said to her, “I am he,[c] the one who is speaking to you.”

27 Just then his disciples came. They were astonished that he was speaking with a woman, but no one said, “What do you want?” or, “Why are you speaking with her?” 28 Then the woman left her water jar and went back to the city. She said to the people, 29 “Come and see a man who told me everything I have ever done! He cannot be the Messiah,[d] can he?” 30 They left the city and were on their way to him.

31 Meanwhile the disciples were urging him, “Rabbi, eat something.” 32 But he said to them, “I have food to eat that you do not know about.” 33 So the disciples said to one another, “Surely no one has brought him something to eat?” 34 Jesus said to them, “My food is to do the will of him who sent me and to complete his work. 35 Do you not say, ‘Four months more, then comes the harvest’? But I tell you, look around you, and see how the fields are ripe for harvesting. 36 The reaper is already receiving[e] wages and is gathering fruit for eternal life, so that sower and reaper may rejoice together. 37 For here the saying holds true, ‘One sows and another reaps.’ 38 I sent you to reap that for which you did not labor. Others have labored, and you have entered into their labor.”

39 Many Samaritans from that city believed in him because of the woman’s testimony, “He told me everything I have ever done.” 40 So when the Samaritans came to him, they asked him to stay with them; and he stayed there two days. 41 And many more believed because of his word. 42 They said to the woman, “It is no longer because of what you said that we believe, for we have heard for ourselves, and we know that this is truly the Savior of the world.”

Sermon
Song for Reflection – Come, Thou Fount of Every Blessing (ELW #807)
https://www.youtube.com/watch?v=eZ67xVv89YQ
Prayers, and a special prayer for a pandemic (by Cameron Bellm)

Lord’s Prayer
Blessing
Now is the acceptable time.
Now is the day of salvation.
May God bless you and keep you, offer you anew the living water,
and through Christ, connect you to this world in new ways.
Amen. 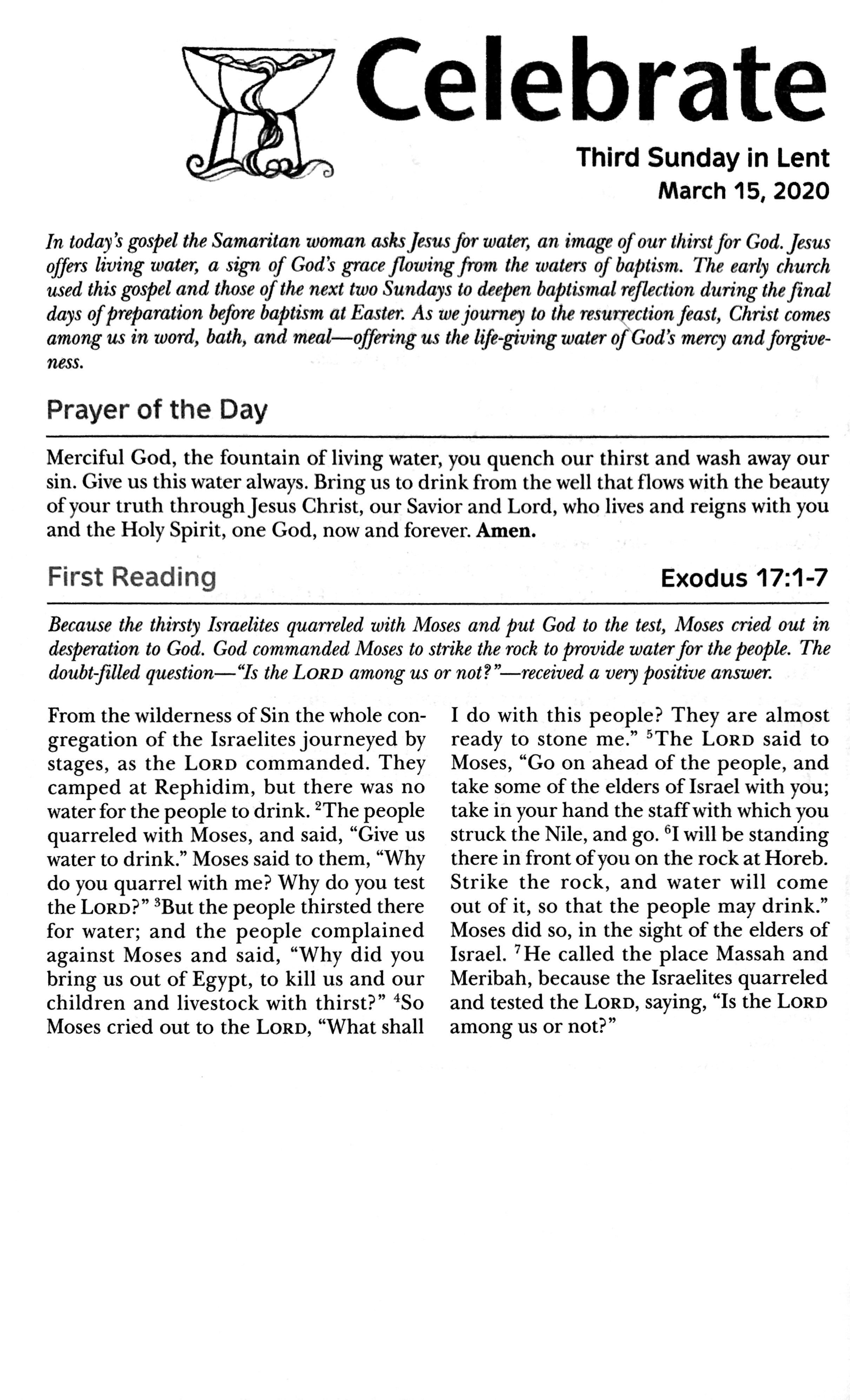