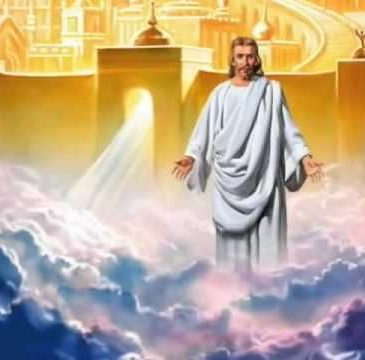 The New Jerusalem, the Bride of the Lamb

9 One of the seven angels who had the seven bowls full of the seven last plagues came and said to me, “Come, I will show you the bride, the wife of the Lamb.”

As John takes us on a tour of the new Jerusalem,

there’s a sense of needing a tour guide for the text,

for thinking about these images and their implications.

Because as much as I have a new-found appreciation

for the “old” Jerusalem, John’s vision is not just about

a luxurious remodel in that corner of the world.

It’s bigger than that.

“I will show you the bride, the wife of the Lamb,” says the angel,

before taking John to the mountain top.  In the New Testament, marriage is a metaphor for the intimacy between Christ and the church.  So all that John tells us next is a vision for the believing community.

If you want to be literal, one of the verses you heard read

describes this city as being fifteen hundred miles on a side.

when ranked by land area.  Anchorage, where I grew up, is fourth;

with an official land area of 1,704 square miles.

But Alaska’s cities are dwarfed by the new Jerusalem.

To try to imagine this kind of area:

if Jackson was one corner of this new Jerusalem,

another corner might roughly be across the Mexico border

in Cabo San Lucas, another in Cancun, and another in Cleveland, Ohio.  To John’s listeners back in the day, this kind of size

was almost the whole of the known world.

To have this kind of view and perspective today, in the spirit one of the angels would have to carry you away to the moon.

The measurement speaks on other levels.

One scholar says measurement was a customary way of saying something is under control.   Further, in the original language

As a multiple of 12, a number that had significance in Hebrew thought and tradition, 12,000 is another way of speaking of community.

So in this vision, John sees a new community,

gifted to the world by God, reigned by God, and big.

And then the tour takes us inside.

The passage highlighted by the lectionary

emphasizes that there is no temple in this city.

This is a huge contrast to the “old” Jerusalem.

Even today, Jerusalem is often recognized

by the Dome of the Rock shrine, which sits on the Temple Mount.

When the temple was previously destroyed by the Babylonian empire, there had been a dream (and eventual realization) of rebuilding it.

now that Rome had sacked Jerusalem.

But John says that in this new Jerusalem there is no temple,

and further says there is no need for one.

He offers an explanation:

“for its temple is the Lord God the Almighty and the Lamb.”

One scholar reflects,  “If a temple separates divine presence from

the rest of the world, then here the divine is immediately present, without a preserve to guarantee and identify holiness.

Christ’s presence in the world, found in a variety of places,

takes the place of the temple in sharing the holiness of God.”   Although I would remind them of the communal aspect of this vision,

I think my spiritual-but-not-religious friends would resonate

with this part of John’s vision.

The city has walls, which are traditionally symbols

of safety and security.  But there’s something funny about these walls.  They have lots of gates – in the general description we are told there are 12 in total.  And now we learn that these gates are all open: they “will never be shut by day and there will be no night there.”

Rather than a fortress, this city is a welcome center.

The adult education hour imagined the angels at the gates

as greeters and visitor guides, rather than as sentries.

to walk by its light, and the kings of the earth bring their glory into it.  And the visitors aren’t just foreign dignitaries and distinguished guests – John says the people of the nations bring in glory and honor.

to Macedonia, and with the psalmist’s including

of all the nations on earth.

In God’s community, this city image seems to suggest,

openness is a real way to safety and security.

But here John pauses.  He holds this image of universal hope

in balance with a clear warning of exclusion.

Nothing unclean; nor anyone who practices abomination or falsehood will enter this city.

We have some understanding of how sin makes one unclean;

and what it means to practice falsehood seems fairly straightforward.  But today, “abomination” is less clear – it seems to be a label applied

But in New Testament usage, this word is more specific.

It occurs in three other places.

as “sacrilege,” and is used when Jesus warns the disciples about the troubled times “when you see the desolating sacrilege set up where it ought not to be.”  Scholars comment that the “saying might have referred to the emperor Caligula’s unfulfilled plan to set up his statue in the Jerusalem temple in 40 CE, or as a reference to the presence of the Roman general Titus standing in the temple in 70 CE as it was destroyed.”   In Luke (16:15), Jesus uses the term when he is arguing with lovers of money.  He says, “You are those who justify yourselves in the sight of others; but God knows your hearts;

for what is prized by human beings

is an abomination in the sight of God.”

We need this call, this vision of community, today

just as much as believers in the Roman world did.

I am struck by the contrast of the New Jerusalem

with policies around the world

that want to deny entrance to displaced people –

just as the United Nations Refugee Agency reports that we are witnessing the highest levels of displacement on record,

with 68.5 million people around the world forced from home.

For me, some of the statistics shared at the immigration presentation this last Monday – of refugees’ repayment of loans being off the charts, of work ethics – corrected the practiced falsehoods

I hear all too often in this country.

is scheduled to be deported next Tuesday.

What abominations are we practicing?

When do we perpetuate or allow false narratives to stand?

How do we justify ourselves and our money?

After giving his warning, John returns

to the promise of this new Jerusalem.

He continues his tour, inviting us in, giving more details.

I like John’s big open city because the cities I have known,

even the sprawling ones, sometimes make me claustrophobic.

The nature lover in me wonders why couldn’t John have seen a new Garden of Eden descending out of heaven from God.

And then John evokes exactly that first paradise.

New Jerusalem is no concrete jungle.

The angel shows John “the river of the water of life”…

with its twelve kinds of fruit, producing its fruit each month;

and the leaves of the tree are for the healing of the nations.”

This is no ordinary tree.  I love that it bears not just one kind of fruit, but twelve, and that it is ever-bearing throughout the year.

I love that healing happens in this city –

that we don’t have to wait to be whole to get in.

Each of us has a street address in this city,

“with grace specific to each one’s needs.”

This is a city of abundance.

And finally, John celebrates the source of all this peace and abundance: the same intimacy with Christ marked by not needing a temple.

In the New Jerusalem, the distance between God’s people and God

is erased.  As Jesus’ promised in the gospel reading,

the Father and the Lamb have come and made their home

God’s servants gather together to offer service and worship,

an ultimate privilege that not even Moses was granted.

And John says that they will reign forever and ever.

“At a time when Rome claimed to reign forever,”

“Revelation boldly proclaim[s] that it is God who reigns –

not the Empire – and that God’s servants will also reign with God.  Note, however, that there is no object of the verb “reign.”

God servants do not reign over anyone else.  The text invites us to explore ways to understand our reign not as domination over,

but as sharing in, God’s healing of the world.”

may that intimacy with the God who comes close,

whose life, death and resurrection split the temple curtain,

be reflected in the ways we live and move in our world.

May the image of the new Jerusalem give us vision

of who to be and become,

as well as give us comfort, courage and healing.